Gastric Plication Surgery, also known as laparoscopic greater curvature plication, laparoscopic gastric plication, gastric imbrication, pseudo-sleeve, and stomach folding, is based on reducing the size of the stomach with sutures (without incision), for restricting food intake. The gastric volume is reduced by 75%, on average.

Gastric plication surgery is performed laparoscopically. The operation takes about 40 minutes on average. Similar to the sleeve gastrectomy procedure, it involves first the liberation of the vein connections in the wide side of the stomach, from the exit of the stomach to the junction of the esophagus. Afterwards, the stomach tissue is folded inward and then two layers are sutured in such a way as to reduce the volume. 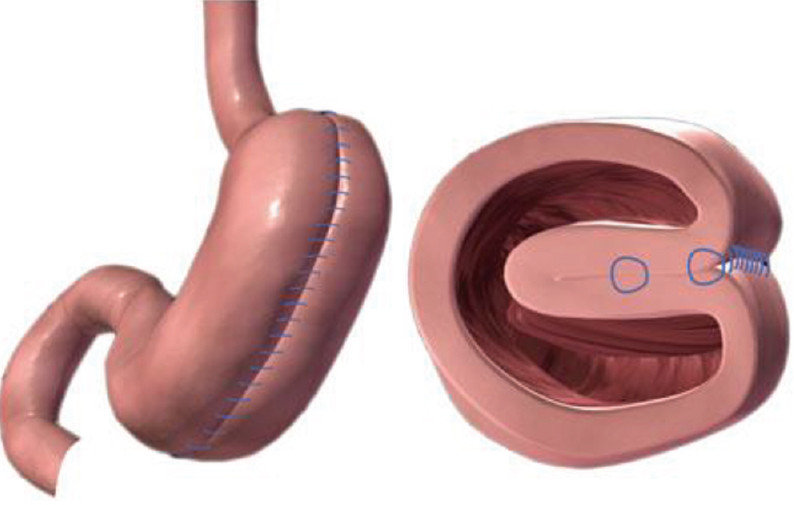 As in all bariatric operations, there are certain dietary rules to be followed after gastric plication surgery. The patient should consume liquid food. in the first 1 to 2 postoperative weeks. In the 3rd to 4th week, he/she should begin to have vegetable soups and other soups. A regular bariatric diet can be started 7-8 weeks after the operation. Your diet consisting of 3-4 tablespoons of healthy foods will be determined by our bariatric dietitian.

This procedure, still considered to be at a testing stage in some countries, has been carried out by us for the first time in our country, and we have also conducted a study covering 48 cases. Many researchers have reported successful results close to results of other procedures.

What are the Risks and Complications of Gastric Plication?

Like all other bariatric surgery procedures, gastric plication surgery can be performed with considerable low risks. Its complication rates in early postoperative period range from 1% to 9%. No mortality risk associated with this procedure has been reported. The risk of a serious complication is less than 1%.

Nausea and vomiting are the most common problems encountered in the early postoperative period. These usually subside with drug therapy and return to normal 1 week after surgery. There is also a study reporting that the technique used for the elimination of these side effects is important.

In summary, if you decide to benefit from this technique, you must set out in company with an experienced bariatric surgeon, who definitely has a command of all other procedures. If a revision is needed after the operation, you should remember that its revision is one of the most difficult ones among the bariatric surgery revisions.

In terms of technical characteristics, gastric plication surgery is most similar to sleeve gastrectomy, i.e. gastric sleeve surgery. In sleeve gastrectomy, a part of the stomach is removed and then the edges are stapled with staplers. In gastric plication surgery, the same part is kept intact and the reduction is provided by using sutures without incision. The philosophy of this surgical procedure is based on two important points: it can provide weight loss at a rate close to that can be achieved with sleeve gastrectomy and gastric bypass; and it is potentially reversible like gastric band procedure. In addition, it does not involve the alteration of the natural mechanism of the digestive system as in bypass or duodenal switch operations. No foreign body is placed into the body, a in the gastric band. Since any part of the stomach is not removed, there is no stapler line; so, the risk of leakage is minimized. In our series, the leakage rate ‘0’.

When we look at its disadvantages, it provides less weight loss in short and long terms. It postoperative period is more uncomfortable compared to that of sleeve gastrectomy. The success rate depends on the patient’s eating habits, to the same extent as in all other obesity surgeries (maybe even more). Since it does not involve the removal of the fundus, the Ghrelin effect is not as strong as in sleeve gastrectomy. According to studies, weight loss and its maintenance are better in patients with a lower BMI compared to those with a higher BMI.

One of the problems specific to this technique is the possibility of suture opening or herniation of a stomach area through the sutures, especially due to the patient’s insistence on not changing his/her eating habits and consumption of excessive amount of food. In such a case, a revision surgery may be needed due to inadequate weight loss, weight regain, vomiting caused by herniation, and impaired gastric emptying.

If a second surgery is needed due to problems that may be encountered after gastric plication surgery or inadequate weight loss or weight regain, it should be remembered that it is technically much more difficult and requires more experience compared to the first operation. This surgical procedure is popular among the candidates who have newly begun to perform bariatric surgery because of its low risk and cheapness (since it does not require stapler costs); however, such primary surgeons have no experience to perform revision surgery. Therefore, you should choose an experienced surgeon and medical center if a revision is needed, regardless of where you have undergone gastric plication surgery.